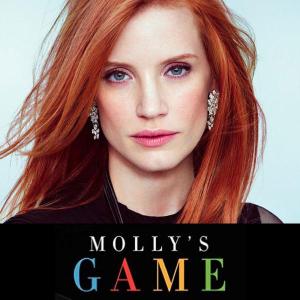 There were just over 20 people in the Wimbledon Curzon, lunchtime audience watching Molly’s Game. Usually at that time there’s less than a handful.

It’s a terrific, dialog-heavy film, superbly acted by the main actors, Jessica Chastain, Idris Elba and Kevin Costner. Maybe not to everyone’s taste – American, fast dialogue, a story based around the game of poker, but I would heartily recommend it.

I missed the preceding adverts but caught the trailers. I usually find trailers off-putting as they seem to give away too much of the story AND they’re always too loud! However the trailer for Three Billboards Outside Ebbing, Missouri looked interesting (and what a title for a film!) and got bonus points for having in the soundtrack the glorious Walk Away Renee by The Four Tops. A film worth seeking out, I think.